I admit that this is a piece of naked marketing. It’s an essay about why you should train in the martial arts here rather than anywhere. Even though my aim here is to influence your decision making when you choose any martial arts school to attend, I voice a very valid concern about the current state of the martial arts in America, the quality of martial arts taught and a troubling philosophy behind these non educated schools. It shouldn’t take a professional detective to know who I’m talking about. Uneducated schools that teach a vaguely defined menu of “martial arts” , karate or worse the trend of Mixed Martial Arts. I once spoke with the owner of a now-defunct martial arts school where they teach Kenpo Karate, Jiu Jitsu and Kung Fu according to their marketing materials and yet when I asked the instructor which style of kung fu he taught there, he casually glanced out the window and shrugged, “All kung fu is pretty much the same,” He remarked, “That stuff you see in the movies; like mantis and tiger style, it’s all made up for the movies.”

I didn’t even know where to begin with that statement.

Sure. Our school is called The Guy Chase Academy of Martial Arts but our use of the umbrella term ‘Martial Arts’ in the name is purely utilitarian. The Guy Chase Academy of Muay Thai, Brazilian Jiu Jitsu, Shootfighting, Jeet Kune Do, Savate, Silat and Kali is a little unwieldy. But the problem isn’t in the naming, it’s in the material taught, it’s in the image and the attitude. Ultimately, when looking for a martial arts school different people look for different things. Some people look for a specific art. Some are looking for a workout. Some have their eye on competitive fighting. Some people just want a place to put their kids for an hour so they can run off some of their energy. Some are looking for a means of self defense. But the truth is, most people don’t know what they’re looking for in a martial art. Out there in the world, individual cultures have spent hundreds, sometimes thousands of year cultivating their own martial arts. Each country has an art that is distinctly their own and from within that system the martial arts become more granular. Take, for instance, the Japanese art of Karate. Karate describes the art about as well as Martial Arts describes, well, martial arts. You don’t learn Karate. You learn Shotokan Karate or Kyokushin Karate or Okinawan Karate. This idea gets lost in all of the cultural noise of America, the great meltingpot, as it were. Such a large country are we and made up of so many different cultures that there is simply too much information out there for us to take in about others. There’s just not enough time in the day. And so, to make things easier on us, all of these various interpretations on Japanese martial arts boil down to a language that we Americans can understand better and a wide spectrum of Karate simply becomes ‘Krotty’. Unfortunately, during the translation process, the nuance and subtlety of these fine arts are thrown out like the proverbial baby with the bathwater. And this is where the trouble starts.

Unbeknownst to many, the martial arts in the United States has become a vast and lucrative industry. Especially since the rise in popularity of the UFC and Mixed Martial Arts as a whole. The competition is, in fact, fierce and they depend on you not knowing, for instance, that Karate and Tae Kwon Do are not the same thing. There is a name for these schools. We call them McDojos. This is a derisive term among martial artists to describe these schools that pop up all over the world where belt stripes are far more important than a quality education in the martial arts. The cost to value ratio in these schools is out of balance and even though I may be biased in revealing this, it’s an important fact to know: these schools are everywhere! Even right here on the New Hampshire Seacoast. They talk big on their websites and in their brochures about confidence, fitness and self defense but not one of them speaks of their martial arts lineage or the application of the arts. Should you find yourself looking for a new school to learn a martial art, ask who taught them the arts that they teach. Ask who taught their teachers. Can they answer these questions? Can they answer them honestly? Believe it or not, this is an important question and the answer will be important. Were they taught at a McDojo? Were their teachers taught at a McDojo? The answer is: probably. A martial arts school in Southern New Hampshire is run by a man who calls himself a Professor and his website makes bold statements about their “Real Authentic Muay Thai” program and then a couple of sentences later describes it as “traditional Muay Thai with a Karate influence”. How can it be authentic and traditional if it has a “karate influence”? You can see how a school such as ours might be frustrated by having to compete with people like this.

Something else to question: do their students compete in martial arts competitions? With so many schools moving away from striking arts to grappling arts like Brazilian Jiu Jitsu due to the art being fashionable, trendy and profitable these days an important question to ask anyone who claims the title of black belt or Professor of the art is who gave them the rank of black belt and professor. Something to know about BJJ, you can’t just declare yourself either of those two things. There is a governing body that gives those statuses according to some rather strict guidelines. Can these black belts and professors, like the one I mention above, prove that International Brazilian Jiu Jitsu Federation recognizes their status? There’s paperwork to prove this. If their BJJ is any good, they’ll take it to the mats in the many IBJJF sponsored and sanctioned competitions that take place all over the country and, in particular, here in New England. Again, I may be biased, but I’ll bet money that their answer is: no. Maybe you’re not interested in competition. That’s fine but the effectiveness of a martial art you’ll be paying for must be demonstrated. Otherwise it would be like buying a used car from a dealership that simply assures you that it runs. Maybe it doesn’t. Seems like an important detail, don’t you think?

See, for martial arts programs such as these, competition means nothing. As a matter of fact, competition does nothing but reveal the flaws of their programs. Many of these Seacoast schools will not compete because their students will be handily defeated by anyone with so much as a month of training in their particular art. Their instructors wear big titles like Sensei, Sifu, Professor and, god forbid, Guru, but can they prove their lineage? Were these titles bestowed upon them by a teacher who approved their status after years of dedicated study and practice? Probably not.

There’s good news, however. Guru Guy Chase can answer yes to all of these questions. His apprenticeship under teachers such as Dan Inosanto, Herman Suwanda, Salem Assli, Karl Gotch, etc. is well-documented on this website and you can inquire directly with these people. Unfortunately, Pendakar Suwanda and Karl Gotch are no longer among us) but you can call or email The Inosanto Academy or the Villabrille Largusa club and ask them to vouch for Guru Guy. We invite you to do this, as a matter of fact. Our students compete. And not only do they compete, they win.

We invite you to visit our academy. See our lineage. See our walls covered in diplomas from prestigious martial arts institutions. Ask about our lineage. See our awards from competitions. Challenge our skills on the mat. Sure, you can go to an area McDojo and they’ll give you a gi and teach you to punch a board and you’ll leave each class with your self esteem properly buffed but will you leave with actual skills in a martial art that you can apply in your life? I don’t think so. When you leave The Guy Chase Academy after a class, you’ll leave with everything those schools can offer you but you’ll also leave with actual martial arts skill.

This is a promise we live by. 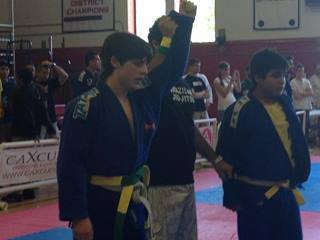 Academy student, Erik Pike, recently won the gold medal for his division after only a few months training at The Academy in Brazilian Jiu Jitsu. His opponent was from a BJJ school that is literally right down the street from our school. Kudos to them for putting their art to the test in a competition setting but Erik still won.