What the heck is Savate anyway?

France is probably the last place you’re likely to think of when it comes to martial arts. As it stands, the Far East has the lock on martial arts thanks to a healthy industry of martial arts film exports and the relative obscurity of Savate outside of France – even in French-speaking parts of Canada – lends a certain ignorance of the style and sport to the rest of the world. To further its rather sheltered legacy, Savate is hardly taught outside of France and to gain the certifications necessary to be recognized as a qualified instructor of Savate you have to actually go to Paris, France and demonstrate your knowledge to the International Federation of Savate through several degrees of glove ranks either in simple instruction or at the competition level. Truly, this is a French art.

Connoisseurs of martial arts in New England will recognize the value and obscurity of an art such as Savate being taught at the Guy Chase Academy of Martial Arts but for the rest of you who may be reading this, wondering just what Savate is and why you may want to study that instead of, say, Kenpo Karate, Tae Kwon Do or any of the other immediately recognizable martial arts taught on The Seacoast, let us take you to school.

The word Savate actually translates into English as ‘old shoe’, the reason for this being that practitioners of the art wear shoes, something of an anomaly in martial arts. In just about any other form of martial arts, you’re going to train barefoot. Prior to the codification of Savate as an art, it was known as Chausson, a word that translates to ‘slipper’, a form of footwear commonly worn by French sailors to avoid slipping on the wet decks of the ships they sailed. As they sailed east to trade with various cultures of Asia, many of these sailors witnessed the martial arts of those cultures in action, each with their own lethally effective system of kicks. Along with whatever imports these sailors brought back to France with them, they also brought those kicks which were combined with whatever method of streetfighting they already employed. Voila! A French martial art is born! The video below shows one of the earliest known films of any martial art, shot by the famous pioneers of film, The Lumiere Brothers. Unsurprisingly, these famous French filmmakers captured a pair of Savateurs.

Unfortunately, Savate’s initial start was on the streets of Marseilles as the poor of France developed it either as a method of beating the crap out of one another in order to rip each other off or as a means of defending themselves from having the crap beaten out of them by Marseilles’ criminal element. However, such an effective form or fighting that it is, it wasn’t long before a portion of French culture recognized it for what it was and began to develop it into a codified system of self-defense and sport. Over time, Savate evolved away from what was probably martial arts of Southeast Asia, those being Muay Lao, Muay Thai/Boran and Lethwei (Burmese Boxing), which emphasize leg strikes from the shins and knees, Savate developed a series of powerful kicks whose strikes originate with the actual foot. The hard soles of the shoes worn during a Savate match allow for the pinpoint accuracy of toe strikes, whereas a barefoot martial art using toe strikes might leave you with broken toes.

Savate originates somewhere in the mid-1700′s but remains Chausson until the Savateur, Charles Lecour emerges and combines the mostly-kicking art of Chausson with English Boxing to create Savate. Savate is further developed, taught and documented for the first time by the father and son combination of Joseph Charlemont (a Student of Lecour) and his son Charles who would elevate the style to the world stage with high profile bouts between Charles Charlemont and superstar of the English boxing world, Jerry Discoll. This bout ended in a victory for Charlemont when he put down Driscoll with a kick to the abdomen, most likely a direct shot to the liver, an extremely painful injury. This fight brings Savate across the Channel to England where it is developed to become the even-more-obscure-martial-art-than-Savate, Bartitsu (the fighting art of choice for fictional detective, Sherlock Holmes). The Charlemonts brought Savate out of the shadows and on to the world stage when it reached its highest visibility in the 1924 Olympics. Savate today is widely practiced in France for sport while French military and police – some taught under one of Guru Guy Chase’s mentors, Robert Paturel – practice Savate as a necessary means of self-defense. Also, like most martial arts it comes with its own unique weapons system, La Canne and La Baton.

Historical importance aside, let’s assume that you’re reading this and wondering why you might choose this art over a martial art with a much higher profile. Savate is among the world’s most powerful and uncompromising striking arts. So dynamic is it that in his research for his own martial art, Jeet Kune Do, Bruce Lee incorporated many of its fist and foot techniques into his system due to their speed, accuracy and highly adaptive nature to any given fight situation. Savate puts a great deal of emphasis on balance, agility and flexibility. Practitioners of this art exchange punches and kicks in an ongoing, very fluid nature, a fight similar to dancing. Conditioning for Savate is a rigorous series of leg and core drills which results in a massively rewarding workout. Dedicated practitioners of Savate cannot help but be in excellent shape because of the sport’s demand on the legs and core. Savate bridges the gap between a pure fighting art such as Boxing or Muay Thai and an abstract martial like the many styles of kung fu or karate which emphasize form and kata. Savate is more than just the novelty of a genuinely rare martial art in the United States but is a highly applicable form of fighting in the ring, in the gym or simply as a highly effective means of fitness.

Drop in to the Academy on Friday nights at 6pm to see what Savate is all about. Check out our Savate page for more photos of Savate in action as well as a host of old-timey shots of the art and its innovators. 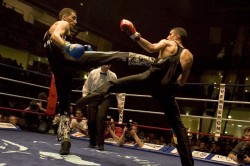 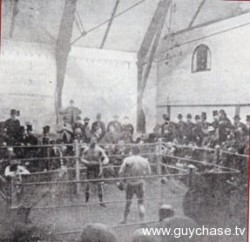 A newspaper photo from the time of the match between English boxer, Jerry Driscoll, and Savate innovator, Charles Charlemont 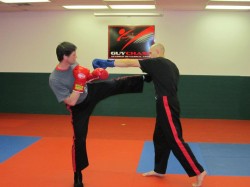